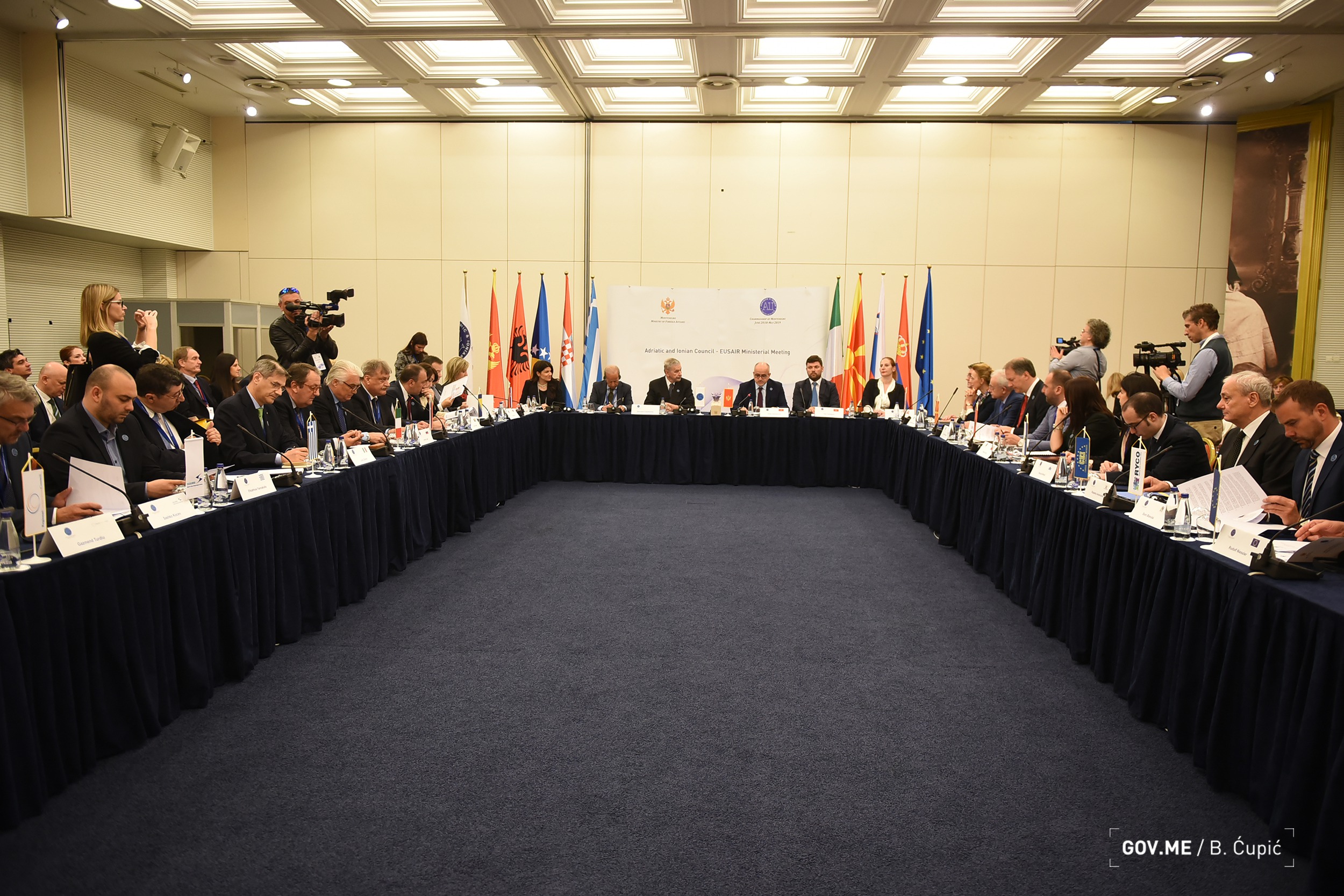 The meeting of the Council of Foreign Affairs Ministers of the Adriatic-Ionian Initiative and European Strategy for the Adriatic-Ionian Region (EUSAIR) was held on May 8th in Budva, concluding the successful one-year Montenegrin Chairmanship of these regional mechanisms.
The meeting has been held within the larger framework of the 4th EUSAIR annual Forum and the 2nd Joint Conference of the Adriatic and Ionian Chambers of Commerce, Cities and Universities.

The Adriatic-Ionian Council/EUSAIR Ministerial Meeting, chaired by the Minister of Foreign Affairs Prof. Dr. Srđan Darmanović, was attended by Ministers of Foreign Affairs of the Republic of Serbia Ivica Dačić, Bosnia and Herzegovina Igor Crnadak, Republic of Croatia Marija Pejčinović Burić, Secretary General of the Adriatic-Ionian Initiative Amb. Giovanni Castellaneta and Director for Smart and Sustainable Growth and Programmes Implementation IV (Southern Europe) in the Directorate-General for Regional and Urban Policy (DG REGIO) of the European Commission Rudolf Niessler. The Adriatic and Ionian Council was also attended by Deputy Ministers and high-level political representatives of all AII participating countries and by the Republic of San Marino – Minister of Foreign Affairs, Political Affairs and Justice Nicola Renzi. In addition, other regional organizations were invited to participate as special guest – the Central European Initiative; the Migration, Asylum, Refugees Regional Initiative; the Regional Cooperation Council; the Regional Youth Cooperation Office.

The adopted Budva Declaration reaffirmed readiness of participating countries to further intensify cooperation in the framework of regional initiatives, while strengthening the European perspective of the region. Additionally the Declaration signed the enlargement of the AII to the Republic of San Marino, which now becomes the tenth participating country of the Initiative.

Minister Darmanović opened the meeting stressing that since 2000, the Adriatic and Ionian Initiative has played a part in changing the historic outlook of our countries. “The very successful one-year Chairmanship of Montenegro have once again reaffirmed our firm determination and strong commitment to regional cooperation and multilateralism”, stated Minister Darmanović, underlining that the priorities of the Presidency were directed to intensifying cooperation in the fields of tourism, culture, environmental protection and research and innovation. The head of the Montenegrin diplomacy also emphasized that significant progress has been made in view of strengthening regional relations with the aim of addressing issues of common interest to all AII countries.

Minister Darmanović handed over the Chairmanship to the Republic of Serbia and assessed that “Adriatic-Ionian Initiative, during its almost two decades of existence, and later EUSAIR, serves as a regional framework for cooperation between countries with the same priority objective – strengthening the European perspective of the region.”

Minister Dačić expressed gratitude to Montenegro and Minister Darmanović for the successful AII/EUSAIR Chairmanship, acknowledging the special attention paid to the promotion of European standards and values. "This is very important to us given that these are the basic preconditions for the full involvement and complete integration of the Western Balkans in the European Union. Serbia will continue its Presidency in that spirit," Dačić concluded.

AII Secretary General Castellaneta, while congratulating Montenegro on a successful Presidency, said that the Budva Declaration sends a strong message in terms of importance of EU enlargement policy. In that context, he stressed that “the AII and its Permanent Secretariat will continue to be an essential tool for fostering regional cooperation by further enhancing policy dialogue and cooperation among the now ten AII Participating Countries. We will continue to support the European integration aspirations of the Western Balkan countries” (here the full speech).

Director Niessler praised the achievements of Montenegro during its Chairmanship, pointing out that the European Commission acknowledges the paramount importance of macro-regional strategies, particularly this one which has an additional political value, encouraging development in the region in order to get closer to the European Union.

Furthermore, after the closing of the Adriatic and Ionian Council / EUSAIR Ministerial Meeting a Memorandum of Understanding between the Adriatic and Ionian Initiative Permanent Secretariat and the Central European Initiative (CEI) Executive Secretariat has been signed by the two Secretary Generals. The signature seals a strong long-standing partnership and contributes to fostering regional cooperation and sustainable development.

The ministerial panel, on the topic “Integration for the people, development for the region”, was also held on the same day in Budva at the end of the Ministerial meeting. Minister Darmanović on that occasion stated that cooperation in the framework of AII and EUSAIR represents an additional incentive for the countries that aspire to accelerate integration processes, as well as that he “proudly emphasizes that Montenegro is the first non-EU country that has been chairing the EUSAIR.” The connection between the Adriatic-Ionian Initiative and the EUSAIR, stressed Minister Darmanović, is of great importance. The key to the success of EUSAIR is further strengthening of its political dimension.

All panellists agreed that the Adriatic Ionian macroregional policy is one of the most successful EU policies in this realm, underlining that activities in the framework of AII/EUSAIR contribute to socio-economic development of the Adriatic-Ionian region, as well as to determining better solutions for the economies of all countries.

The Serbian Minister for European Integration, Jadranka Joksimović, in her intervention highlighted that there is always room for improvement. For this reason the upcoming Serbian Presidency of AII/EUSAIR, which will formally start on June 1st, will focus on emphasizing tangible outcomes, especially in the areas of energy infrastructure and transport connectivity, with the aim of achieving visible and concrete results of cooperation in the region. The formal handover of the presidency between the Montenegrin Foreign Minister, Srđan Darmanović, and his Serbian colleague, Ivica Dačić, marked the end of a very successful Forum.

Within the framework of the Montenegrin Presidency, an art exhibition of painters from all countries of the Adriatic-Ionian Initiative was also held in Budva and it was officially opened by Minister Darmanović and Minister of Culture Aleksandar Bogdanović.