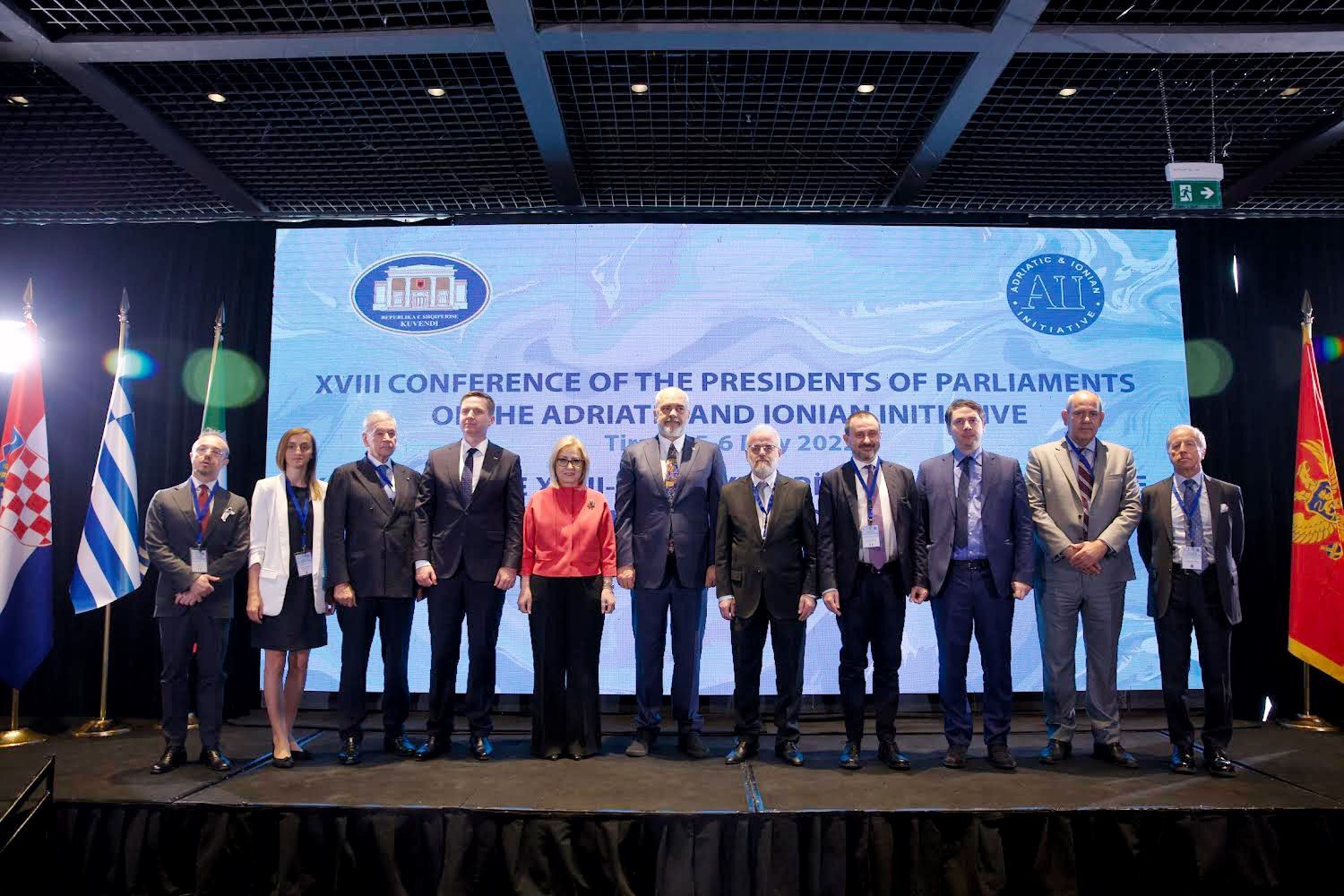 XVIII CONFERENCE OF PRESIDENTS OF AII PARLIAMENTS – MAY 5-6, TIRANA

On 5-6 May 2022, the Albanian National Assembly hosted in Tirana the 18th Conference of the Presidents/Speakers of Parliaments of the Adriatic and Ionian Initiative (AII), organised in the framework of Albania’s one-year AII Chairmanship (from June 2021 to May 2022).

The conference was chaired by the Speaker of the Albanian Parliament, Mrs. Lindita Nikolla, and was attended by Speakers and representatives of Parliaments from the Participating Countries of the Initiative.

The XVIII Conference was opened by the Speaker of the Assembly, Mrs. Lindita Nikolla and the Prime Minister of Albania, Mr. Edi Rama.

In her speech, President Lindita Nikolla praised the high development and cultural potentials of the Adriatic-Ionian Region and focused on the EU integration process of the five participating countries of the Initiative: Albania, Bosnia and Herzegovina, Northern Macedonia, Montenegro and Serbia, which are at different stations towards EU integration.

"The Western Balkans has its place in the EU. However, it must be said that the process of European integration is perceived in different ways. The 27 member states and bodies of the Union speak of the "enlargement process". Meanwhile, our countries are talking about the "European integration process". The terms describe the same process, seen from different sponds. But I fear that these different perceptions have pushed some member states towards assessing the Western Balkans as an added problem of the European Union. The Western Balkans is a region with European roots, identity, values ​​and aspirations.
The technicalities of the enlargement process, we must not forget that strategically our countries have their place in the European family. We are entering the fourth decade of the wave of democratization on the continent and the geographical and cultural borders of Europe are still far from its political borders, the European Union. Europe will become a more beautiful project when its political borders approach its geographical and cultural borders.”

"I express the gratitude of the Albanian Parliament for the continuous and determined support of the four member countries of the Initiative, Croatia, Greece, Italy and Slovenia, and their Parliaments for the European integration of Albania and the Western Balkans", said Mrs. Nikolla.

The Prime Minister, Mr. Edi Rama, in his speech presented the importance of the Adriatic-Ionian Initiative in the framework of peace and development. Referring to the situation created after the war in Ukraine, he stressed that it is a very important moment to strengthen cooperation in this region, to build as many new bridges of cooperation and interaction between people, business communities, arts and culture communities and states. "All of us, meanwhile, are in the process of integrating into the European Union, which we have learned at the expense of which is not an easy process, sometimes even a neurotic process. As we speak, Albania is in a very, very strange situation, hostage to a deadlock between our neighbor, Northern Macedonia, and our friendly country, Bulgaria. It is one of those situations that only the European Union can create and there is no book, no inexperience or any measured explanation of how it can be handled. How can you remain hostage to a dispute between two entities or other countries? But, here it is, as Donald Trump would say. Thus, we must move forward, we must not lose patience, but first we must not lose our passion for Europe. Europe for us is what it was for the founding fathers, a genuine project of peace and security. For some who are bigger and richer, Europe is an ATM, for us it is not. For us it remains a place of peace and security and not only that but Europe for us is our first choice of free will in history. "Europe is our first choice of free will", stressed Mr. Rama.

Moderated by the Speaker of the Assembly, Mrs. Lindita Nikolla, the conference continued with the session "European Integration: Western Balkans, an added value of the Adriatic Ionian Region and of the European Union", in which the main discussants were Mr. Taulant Balla, Vice President of the National Council for European Integration and SPA Parliamentary Group Chairman, as well as Amb. Giovanni Castellaneta, Secretary General of the Initiative.

In his speech, Mr. Balla assessed that the future of all Western Balkan countries is in the EU and that for Albania the only plan A is Europe. Referring to the situation created after the war in Ukraine, Mr. Balla underlined that: "This new geo-political situation that has been created should make us think more carefully and consider the EU as a strategic organization, not just a politico-economic organization. "I believe we all share the same conviction that the EU is incomplete without the Western Balkans."

Mr. Balla further stressed that Albania has met the conditions and has shown commitment to EU-oriented reforms. Appreciating the support of the 4 participating countries of the Initiative for the support of the Western Balkans in the integration process, he assessed that a change in the EU mechanisms is needed for the accession and membership process of the candidate countries and that the Western Balkans has the right to request a more fast approach.”

Secretary General of the Adriatic-Ionian Initiative, Amb. Giovanni Castellaneta, underlined that the conference takes place at a special and crucial historical moment, because the war in Ukraine has been going on for more than 70 days. Emphasizing that the foundations of the Initiative are rooted in the values ​​and standards of the European Union, Mr. Castellaneta assessed that first, the war at the gates of Europe aroused the awareness of Europeans about the important role that the European Union can play in foreign policy and that there is a "gap" due to the absence of the Western Balkan countries in the EU. Mr. Castellaneta underlined that the membership of the Western Balkan countries would strengthen the stability of the entire region and that a change of pace and an acceleration of the integration process of the Western Balkans is needed, with a roadmap envisaging the resumption of negotiations launched with Montenegro and Serbia, the convening of Intergovernmental Conferences on Albania and Northern Macedonia, the recognition of Bosnia and Herzegovina with candidate status. "Today's meeting is important to highlight and shed light on this urgency, especially under the Albanian Presidency, which has been waiting for many years to see tangible progress towards the European Union," said Mr. Castellaneta. In conclusion, thanking Albania for the constructive and productive leadership of the Adriatic-Ionian Initiative and the Albanian Parliament for strengthening the parliamentary dimension, Mr. Castellaneta wished success to Bosnia and Herzegovina, the participating country that takes over the initiative (Speech).

The second session of the Conference had at the core of the discussion tourism and culture, as a priority of cooperation between the countries of the Initiative. The main discussants were the President of the Assembly of the Republic of Northern Macedonia, Mr. Talat Xhaferi and Mr. Vasilios Digalakis, Chairman of the Standing Committee on Cultural and Educational Affairs of the Greek Parliament.

Mr. Talat Xhaferi, who moderated the second session, noted the role of various forms of tourism in increasing cooperation between the countries of the region, the integration of economies, cultures and the rapprochement of peoples. The head of the Greek parliamentary delegation, Mr. Vasilios Digalakis, underlined that all countries of the Initiative can and should cooperate to increase the contribution of tourism in economic development, social cohesion, increase investment and trade exchanges and regional cooperation. Deputy Speaker of the Assembly, Mrs. Ermonela Felaj, pointed out the great potentials and cultural diversity of Albania and the opportunities it offers to increase cooperation with the countries of the Initiative.

Please find here the Joint Statement, adopted at the 18th Conference of the Presidents/Speakers of Parliaments of the Adriatic and Ionian Initiative.